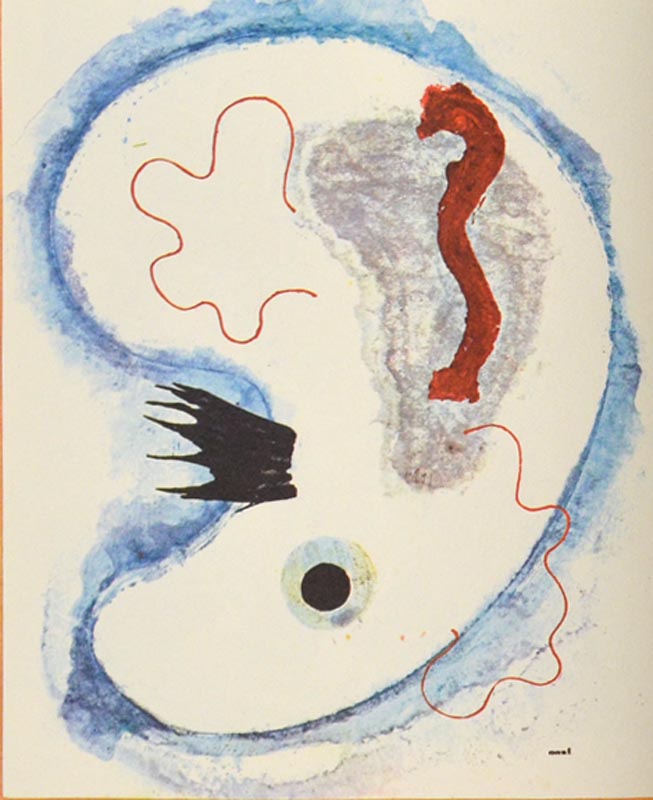 The accomplishments of Onchi Kōshirō 恩地孝四郎 (1891–1955) throughout the first half of the 20th century extend far beyond his eminence as a printmaker. He was an innovator who domesticated the ideas and ideals of abstraction and "creative printmaking" in Japan when still in art school. He was also an oil painter, largely in his early years, where he experimented with themes and concepts he would also apply to his prints.

From his early years, working with Takehisa Yumeiji 竹久夢二, among others, he began a long career as a book designer and book illustrator. From the very beginning of his life in the arts he was the center and focus of the Creative Print Movement (Sōsaku Hanga 創作版画), surrounding himself with fellow artists who took inspiration from his dedication to the cause of self-expression. From his student efforts in the nineteen-teens until his premature and much-mourned death in the 50s, he was a dominant influence in his world. He was also a poet and photographer of no mean skill and combined all those interests in the wonderful artist's books he created.

Onchi was editor of the most important book arts periodical of the pre-War period, Shosō Magazine 書窓. He designed over a thousand books, collaborated in his later years with such important figures as Kitasono Katue 北園克衛 - in short, he WAS the major figure involved with works on paper in his time and provided support and inspiration to scores of other artists.

It has been decades since the wonderful work on Onchi done by Elizabeth Swinton, the only substantial work on him ever done in English. Though he is the subject of a small cottage industry of scholarship in Japan, he is largely a much-admired mystery abroad in the 21st century. Just this past fall/winter 2021-22, the Chicago Institute of Art held an exhibition of his abstract prints.

We are showing interesting material by him that covers the breadth of his output: original artwork - illustrations, prints and paintings - several trade bindings and one artistic binding designed by him and  a nearly complete run of Shosō magazine 書窓.

Please click on the link below to enjoy photos and descriptions. 1919. Onchi Kōshirō 恩地孝四郎. [Abstract Oil Painting]. Oil painting approx 41 x 32 cm in image size, an abstract(ish) still life with an apple, done while Onchi was quite young in about 1919. It is signed by him and is quite unusual in its embrace of abstraction (with a hint..... More 1920. Onchi Kōshirō 恩地孝四郎. [A GROVE OF TREES] Oil on canvas, 45 x 33 cm. It is from a series of landscapes done in 1921. It is unsigned, but its authenticity is attested to by Onchi's eldest son, Kunio, on a slip affixed on the reverse of the canvas, with..... More 1953. Onchi Kōshirō 恩地孝四郎. LOVING SERVICE SEAL HANGA. 28.3 X 21.2 CM. Tokyo: The Central Community Chest of Japan, Inc., (1953). The front and back covers of this pamphlet are color woodblock prints by Onchi. There is a text folder inside by Onchi enclosing 10 small woodblock print seals by..... More Post WWII. Onchi Kōshirō 恩地孝四郎, artist. A Framed Collection of Woodcut Illustrations. After the war, Onchi Kôshiro created a series of woodcut illustrations for a project involving the publication of a revamped classroom curriculum for Japanese students in the post-war era. For whatever reason, those designs do not appear to..... More 1951. Onchi Kōshirō 恩地孝四郎. Drawing - Gekkan Kyōto Mag 月刊京都. An original drawing and magazine printer's proof page, tipped onto a single sheet, 27.4 x 19.2 cm., along with a xerox of the illustration and article as printed in the magazine in 1951. The article was entitled "HAHA NO TERYÔRI"..... More